The top 10 drinkers in art

From Bacchus weaving his spell in a Spanish street to Gilbert and George getting gradually drunk on Gordon's, here's our pick of pieces in which booze plays a key part 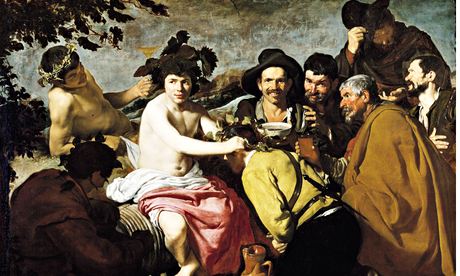 Measure of success … The Triumph of Bacchus by Diego Velázquez (1628). Click to enlarge. Photograph: The Gallery Collection/Corbis

In this ironic masterpiece, the Spanish painter whose career took him from portraying the street life of 17th-century Seville to painting the king in Madrid and the pope in Rome edgily juxtaposes myth and reality, high art and low life. Like a modern conceptual photographic artwork (except done in magnificent oil paints), it imagines that the ancient god Bacchus has come to earth in early-modern Spain. Instead of the satyrs and maenads who follow him in the old stories, Bacchus is surrounded by scruffy boozers. The myth of wine as cultural aspiration meets the reality of drink as an escape from poverty.

In this strangely hypnotic video, Gilbert and George sit and drink from a bottle of gin to the strains of romantic classical music. Elgar woozes as they booze. They get progressively drunker, their movements visibly clumsier. A brilliant early use of video to record action in real-time, this is a haunting work of art that shows two men in search of ecstasy and oblivion. 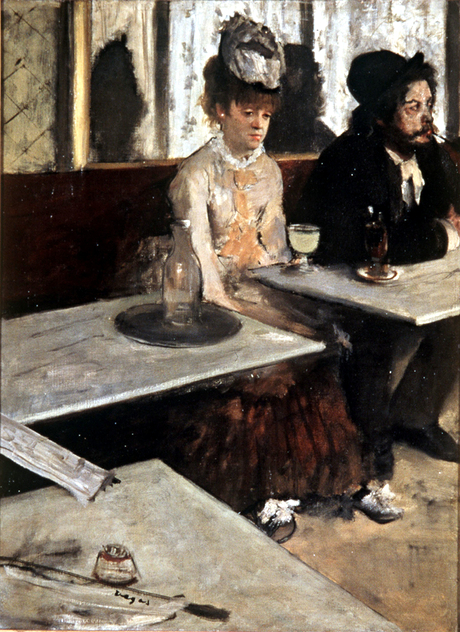 Degas's In a Cafe (or Absinthe) (1873). Photograph: AP
The green fairy, absinthe, is truly a demon drink in this acidic portrait of life in bohemian Paris almost 150 years ago. Degas homes in on the misery of a woman contemplating her pale green poison as she sits isolated at a cafe table. It's an acute observation of a changing world: alone in the city and cut off from the rural, communal bonds that had until so recently shaped European life, she pauses for thought before plunging into a drunken numbness.

In his deliberately shocking photographs of Russians living on the edge of society, Mikhailov chronicles the underside of one of the world's most famously drink-friendly cultures. Robbed – in the artist's eyes – of the predictability and protection of communist life, these people who were adults when the USSR ended have descended into a real-life hell awash with vodka.

In ancient myth, Silenus is the fat, drunken old friend of the wine god Bacchus. In this majestic baroque painting, he is so drunk he can't stand up straight. As satyrs gladly support his weight, his massive body slumps in a rollicking landscape of sweat, wrinkles and abandon. He is utterly happy in his humiliation, at one with nature itself as he partakes of the grape, lost in visions of the divine that come to him in his drunken state. 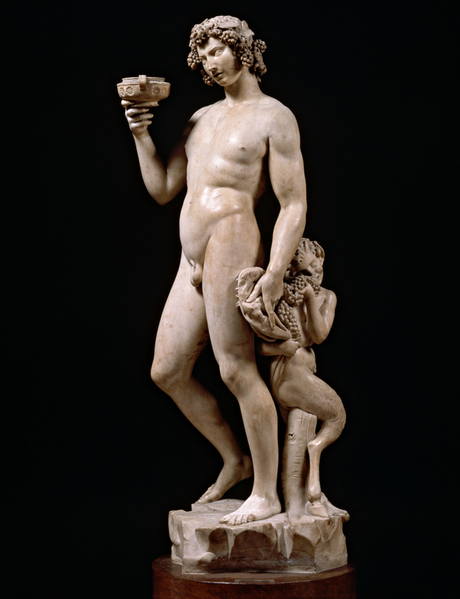 Michelangelo's Bacchus, 1496-1497. Photograph: Arte & Immagini srl/Arte & Immagini srl/CORBIS
In ancient mythology (and most Renaissance art) Bacchus is a mighty god, uncannily in control as he gets mortals drunk. Young MichelangeloBuonarroti saw it differently. He saw everything seriously, saw life as infinitely grave. The Bacchus he carved in his early 20s in Rome is an image of terrifying madness. He is a drunk, and a scary one. His eyes are shockingly vacant, his head awkardly angled as he starts to lose control. This is the most profound and far-reaching image of intoxication ever created by an artist.

Jan Steen portrays himself as one of the crass male boozers bullying a waitress in this scene from 17th-century drinking life. Where Velázquez used mythology to reveal reality, Dutch painters in Steen's time were happy to dwell in an everyday world unredeemed by classical allusions. So this is probably the kind of thing that really went on in pubs in the 1600s. Jan Steen, by the way, is the idiot lifting the woman's skirt. 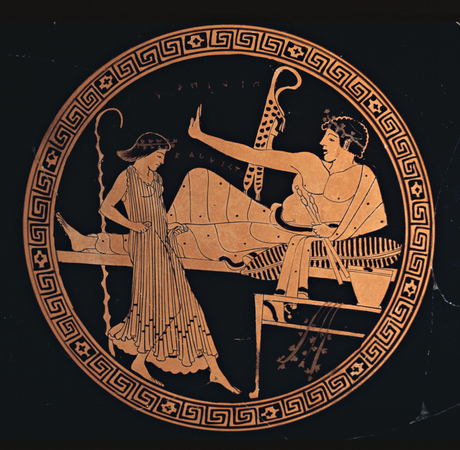 Red-figure Cup, attributed to the Brygos Painter (c490-480BC). Photograph: The Trustees of the British Museum
Drinking parties were central to male upper-class society in classical Athens. The social life of this pioneering democracy – where philosophy, drama and art reached the heights – was lubricated by strong wine. This painted cup shows a symposium (a drinking party) where a wealthy young man reclines, huge drinking cup at his side, to watch a dancer. It may look like pure indulgence, but according to Plato the conversation at such a drinking party could get serious: his dialogue The Symposium records a deep debate at a drunken get-together.

The British artist who collaborates with her subjects to create dramas of real life photographed Theresa and Seamus as part of a project on London street drinkers. She was interested, she said, in people freed from their inhibitions: "Alcohol is an obvious tool in freeing inhibition. It takes away a lot of rational thought, leaving us much more physical and emotional ..." It's the same boozed-up freedom from reason that baroque painters once found in the myth of Silenus. Are Theresa and Seamus modern Silenuses, showing the wisdom of the drinker? 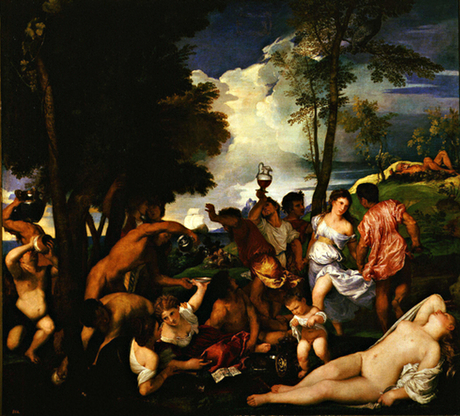 Titian's Bacchanal of the Andrians (1523-1526). Photograph: Alamy
Drunkenness has never looked as beautiful as it does in Titian's painting of a wine-fuelled party in the open air. These drinkers conduct their antics with a magical grace. The dancers do not fall over. The wine jug balanced on a man's hand does not go flying. Wine has freed everyone from inhibition and made them amorous. In vino veritas. These drinkers do not yell at each other, vomit or pass out. Instead they all seem to be falling in love. One woman lies in a naked ecstasy as wine unleashes her passion.
στις Απριλίου 02, 2014