Official poster for 2014 festival resurrects vintage glamour thanks to Marcello Mastroianni, the Italian star of Fellini's 8½ 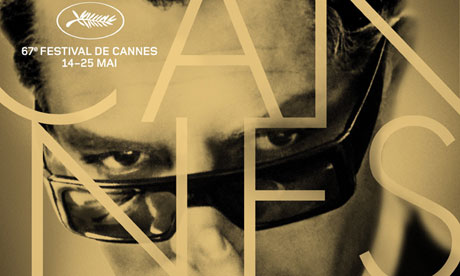 Cool on the Croissette … the 2014 Cannes film festival poster. Photograph: Cannes film festival. Click to view full image
The lineup won't be announced until Thursday, but the race to this year'sCannes film festival has already started. The team on the Croisette have let loose this year's official poster, the image that will be staring down on film star, chancer and harried journo alike from its grand perch on the Palais des Festivals.
In recent years, the festival's poster designers have plumped for stars being playful, a reflection of its attempts to balance art (Haneke, Malick, Loach, Cantet) and fun (errrrr … Pirates of the Caribbean 4). Paul Newman and Joanne Woodward snogged on 2013's offering, Marilyn Monroe blew out the candles on the cake of 2012's. This year, Marcello Mastroianni, the Italian star of Fellini's 8½, gazes down the lens with insouciant cool. Come May, there will be thousands of people swarming the Coissette who think they're this suave.
It's a classy number, alright – a poster that plays up the festival's vintage, while keeping it hip. Cannes might just have got the hang of this promotion lark. Mind you, the less said about the year of painter-decorator Juliette Binoche, the better …
• The 67th Cannes film festival runs from 14-25 May, opening with the Nicole Kidman-starring Grace of Monaco. Come back to theguardian.com/film on Thursday for full details of films appearing in competition.
στις Απριλίου 16, 2014