The nominations are in for the UK's most inspiring museum or heritage visitor attraction of the past year – who should win? 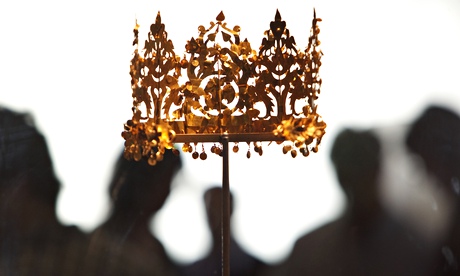 Who will be crowned the winner? An artefact at the British Museum's Afghanistan exhibition. Photograph: Graham Turner for the Guardian
The Guardian Culture Pros Network has teamed up once again with the annual Museums + Heritage Awards to launch a search for the UK's most inspiring museum or heritage visitor attraction of the past year.
We've sifted through over 350 nominations for the award, and the following five museum and heritage attractions received the most nominations to go through to the public vote:
• The Haslemere Educational Museum, Surrey• Barts Pathology Museum, London• Powell-Cotton Museum, Quex House and Gardens, Kent• Russell-Cotes Art Gallery and Museum, Bournemouth• Kelmscott Manor, Gloucestershire
Last year's winner was the Grant Museum of Zoology. But who should win this year? Use the voting tool below to choose the UK institution you think is a shining example within the sector for its approach to audience engagement in 2013-14. The winning attraction will gain the recognition of its peers and visiting public alike.
Museums + Heritage Awards 2014 Culture Pros Pick – who should win?
VotePolldaddy.com
Reading on mobile? Click here to vote directly
Voting closes at midnight on Friday 11 April 2014, with the
στις Μαρτίου 30, 2014